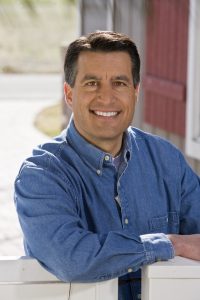 Question 1 on the ballot in November asks if Nevadans support an aggressive background check expansion for prospective gun owners in the state. We do not know how every citizen will vote in a few months, but we now know the stances of two of the most powerful state citizens.

Governor Brian Sandoval and Attorney General Adam Laxalt recently voiced their opposition to the expansion stating that Sandoval, in particular is concerned the measure would unnecessarily restrict rights of law-abiding Nevadans, while not issuing enough of a solution to “the complex issue of keeping firearms out of the hands of criminals.”

Governor Sandoval’s public statement drew praise from the NRA in a statement from Nevadans for Freedom state director Robert Uithoven, also adding that approval of the measure would cost Nevadans “time, money, and freedom.”

If a yes vote were to go through, the law  would require background checks through a licensed gun dealer when most firearms change hands, except for temporary transfers of a weapon while hunting or target shooting, for immediate self-defense, and transfers between immediate family members.

The governor and attorney general joins most of the state’s elected sheriffs and several state lawmakers in opposing the measure. However the law still faces opposition from special interest groups in Nevada, headed by the Brady Campaign to End Gun Violence and Nevadans for Background Checks.

Spokesperson for Nevadans for Background Checks Jennifer Crowe stated, of the governor and attorney general’s stance. “Obviously, this is a political calculation,” continuing “It’s unfortunate that politics trumps policy when background checks are a proven method to curb gun violence and save lives.”