Join Our Newsletter
Shop Our Store
MAIN MENUMAIN MENU
By Jacob Paulsen on November 21, 2016 in News 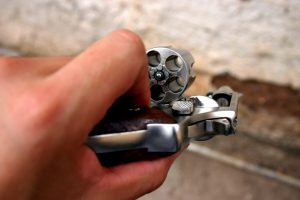 An attempted armed robbery of a 7-Eleven on Cheyenne Avenue and Civic Center Drive in North Las Vegas turned into a shootout on Thursday Morning that left the suspected robber, 24-year-old Rashad Ryan dead when an armed citizen inside the store shot the suspect.

“I got scared, it’s  scary, I was shaking, you know,” said bystander Alejandro Andrade Llamas. Alejandro had shown up at the 7-Eleven, where his wife works when she didn’t come home from work.

Employees could be seen standing outside the convenience store where police say a bystander shot and killed the alleged armed robber.

Police say the shooter was inside the 7-Eleven fulfilling a job but is not an employee of the convenience store.

The injured suspect ran out towards a back parking lot where he collapsed. Meanwhile, employees called for police through a silent alarm. “Obviously we would like people to call police and allow us to handle that and not put themselves in danger,” Cavaricci said.

North Las Vegas Police say justifying a self-defense shooting is “tricky” and must be investigated on a case by case basis. Speaking in general terms, police say deadly force is justified when there’s an imminent threat and there’s a need to defend one’s life or someone else’s.

“In this case, there was an armed robbery going on and he felt that he needed to take action,” Cavaricci said.