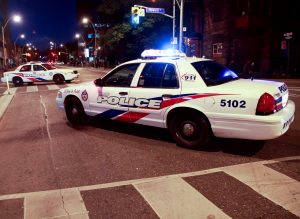 Las Vegas, Nevada — At about 6 pm on April 5, officers were called to the area of West Washington Ave and Spyglass Lane according to Las Vegas Metro Police. They were in search of a suspect.

An air police unit noticed a motorcycle driving suspiciously in a shopping center, then took off in a reckless manner speeding northbound on Decatur. The air unit remained in pursuit. Reports show that the motorcyclist got off the bike at Vermont Ave and ran east toward the local automotive dealership.

An armed citizen noticed the air unit in pursuit of the suspect and saw him jump a barbed wire fence behind the dealership, landing in the adjoining neighborhood. The 40-something year old man called the police and followed the suspect on foot to a pathway in a condominium complex.

That’s when the suspect pulled out a knife, causing the good Samaritan to draw his gun.

He fired two rounds at the man hitting him both times. It’s being reported that the citizen then went to retrieve his first aid kit, but the man was pronounced dead on the scene when medical services arrived.

The suspect was identified by the coroner as 27 year old Joshua Thomas.

At this time police believe the shooting was in self-defense, but the case was sent to the district attorney’s office for review.

It’s always a good idea to have a medical kit on hand to administer first aid to anyone who may need it. For the best field medical supplies and trauma gear we recommend Mountain Man Medical. Their kits were designed and put together by combat trained Navy Corpsman who served alongside Marines.